In the previous part, we have listed the leading marketplaces in North America. Now it’s time for some facts and figures on marketplaces that dominate the European ecommerce landscape.

In Europe, the ecommerce market revenue is worth $363 billion, with an expected annual growth of 7.3%. Experts estimate that by 2022 the European market volume will be worth as much as $481 billion. This is a lot considering the fact that in Europe there are 50 different countries, more than 200 languages spoken and 28+ currencies used.

Obviously, most of the action happens in just three European countries, that is, UK, Germany and France, but on our list we have also included marketplaces that are leading or growing in some other corners of Europe.

Allegro is the largest Polish marketplace and number five on the list of Europe’s most visited online marketplaces. With 13 million active users, Allegro is a good opportunity for B2C brands and professional re-sellers to expand into Poland’s thriving €10 billion online market.

The only obstacle is language – Allegro operates only in Polish, so product listings and customer support have to be localized.

ASOS is one of the largest online only fashion retailers in the world with websites in UK, Europe, USA and Australia. The company targets young sellers and having noticed the growing trend of marketplaces and selling up-and-coming designers’ clothes and handpicked boutique fashion, it has opened its own marketplace.

By 2017, Asos.com was generating almost £2 billion a year in revenue and has become the leading online apparel site in the UK. Since March 2018 they also introduced their mobile app, which has 10 million downloads. The app allows users to upload images of clothing they like and receive a range of matching or similar items that the company stocks. ASOS claims that in the UK 58% of purchases happen on mobile devices.

Cdiscount is a French marketplace with roughly 8.6 million active customers and 19 million unique visitors per month. It sells products across 40 different categories with over €1 billion in annual sales.

Since 2018 Cdiscount started delivering some items to Belgium, Germany, Italy and Spain, which marked the beginning of its international expansion. Growing cross-border presence of Cdiscount is the result of its 15 percent year-on-year growth in net sales.

During the second quarter of 2018, Cdiscount customers placed 5.8 million orders for 11 million items. At the moment, the Cdiscount marketplace has 10,000 connected sellers.

Emag is the largest ecommerce site in Romania with over 500,000 unique customers each day. Sellers can list products in in over 1600 available categories.

The platform currently hosts 3,500 sellers and more than 1.4 million products, generating more than €100 million in revenue and over 1.9 million orders for marketplace partners. The highest sales are generated in the categories of car accessories, home & deco, children & toys, fashion and sport.

Flubit the largest UK-owned marketplace. Hosting a catalogue of over 70 million products across categories including home, garden, toys, books and electronics, it positions itselfs as a direct competitor to Amazon. At the moment, it has 1,500 UK and Irish sellers.

In November 2017, Flubit was ranked as the #10 most valuable VC-backed eCommerce company in Europe, and #2 in the UK.

In 2018, Flubit.com was acquired by the prominent blockchain technology group MonetaryUnit. The decision, at the time of the deal, would reportedly make Flubit.com the world’s largest shopping marketplace dedicated to the acceptance of cryptocurrencies. 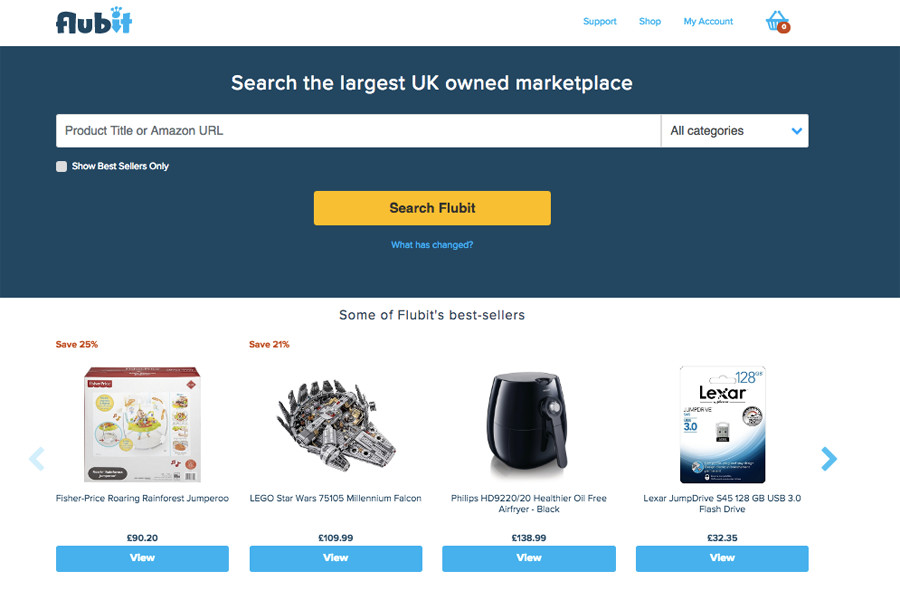 Fruugo is a U.K.-based marketplace available in 32 countries and has more than 25 million active users. Sellers can register once to sell across all markets available in the portfolio. The site supports 22 currencies and 17 languages.

Fruugo marketplace operates with hundreds of retailers on a no-sale, no-fee basis, and offers them translation, customer service, marketing and foreign exchange support, so the retailer only needs to fulfil the order.

Compared to its European competitors, Fruugo is a relatively young marketplace, but it is expecting 200% growth in the next few years.

Mobile.de is a German marketplace for selling vehicles to businesses and consumers. The site has customers from throughout Europe and is the biggest automotive marketplace in Germany.

Its platform allows buying and selling used and new cars, motorcycles, and motorhomes and caravans, as well as trucks, and commercial and utility vehicles. The company’s platform also enables users to search dealers, as well as find financing and insurance deals.

The company was founded in 1996 and is based in Kleinmachnow, Germany, but since 2004 it operates as a subsidiary of eBay Inc. 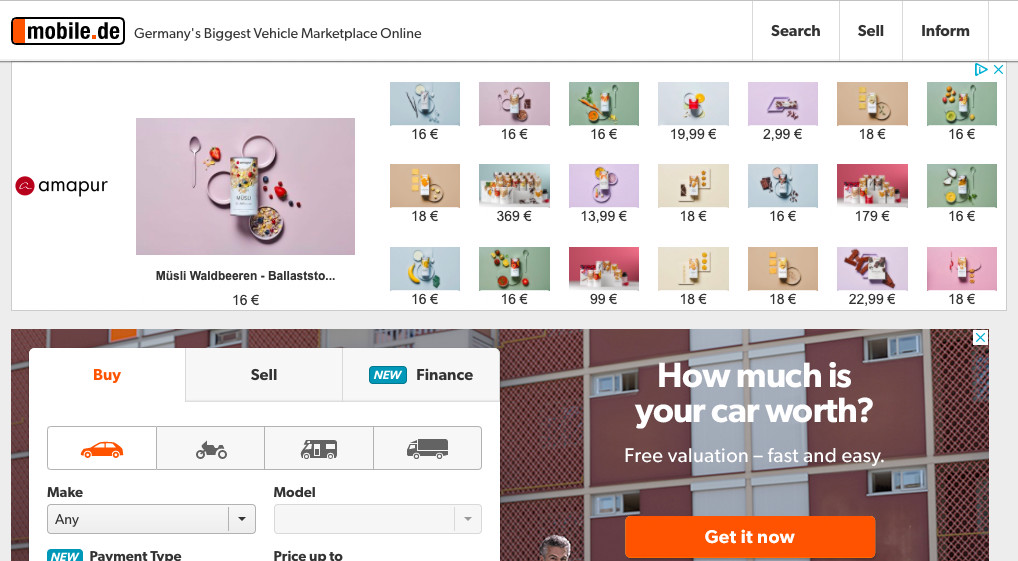 OnBuy is a B2C online marketplace where third-party business sellers can list new, used or refurbished products and buyers can browse thousands of categories, compare and securely purchase with PayPal Buyer Protection.

With thousands of sellers and over 10 million products, buyers can shop from multiple sellers in a single transaction with a simple, secure checkout solution free from many online fraud risks. Thanks to its reasonable selling fees and immediate payment by PayPal, sellers will enjoy risk-free selling and access to millions of buyers with no competition from OnBuy.

The marketplace was launched in 2016 and is experiencing meteoric growth; ready to launch internationally, with an aggressive growth plan targeting more than 140 countries over the next 18 months.

It originally started as an offline brand, but now 90% of its goods are sold online and it also has a marketplace, on which it sells goods itself and allows third party sellers.

The company has 9 million active customers and reaches 45% of all German households. For marketplace sellers, OTTO represents the biggest ecommerce opportunity in Germany after Amazon.

PriceMinister was founded in 2001 and is a leading French marketplace with 22 million members and 9 million visitors per month. This is the equivalent of one third of all internet users in France.

In 2010, it was bought by Rakuten, and has been growin steadily since then. Now it operates in 20 countries and hosts an average of more than 30,000 transactions per day, which makes it the second most visited e-commerce platform in France (behind Amazon).

Kaufland.de is one of the biggest and fastest growing marketplaces in Germany! Being part of the Schwarz Group, Kaufland.de belongs to one of Europe’s biggest retailers!

In 2023, Kaufland will open further online marketplaces in the Czech Republic and Slovakia.This step is the underlying foundation for the launch of the ‘Kaufland Global Marketplace’.

Over 8000 sellers offer more than 40 million products in over 5000 categories on Kaufland Global Marketplace. This attracts 32 million visitors to Kaufland.de every month.

Zalando is a German marketplace that has expanded to multiple European markets. It’s particularly prominent in Germany, where they boast 95% brand recognition amongst adult shoppers but it has also been expanding into other countries too in recent years and opened fulfilment centres in Sweden and Belgium in 2017.

The latest figures say that they have 20 million active buyers and a 7.4% share of the Western Europe fashion market that totals $42 billion.

Zalando has more than 22 million customers and sells over 250,000 products from 2,000 merchant brands.

What to remember about when dealing with Germans?

Jobs for e-commerce professionals you can find here: