RetailX has prepared a report about eCommerce in 2020 – and we wouldn’t be ourselves if we didn’t dive deep into it!

In this article, you will find six parts, discussing each continent’s issues. If you are interested in reading the full report, you can download it here.

The report covers as many as eight African countries – Egypt, Ghana, Kenya, Morocco, Nigeria, Rwanda, South Africa, and Tanzania. Below you will find highlights of the three. Africa is quite a diverse continent. Digitization is increasing, which means on-line solutions are in higher demand. 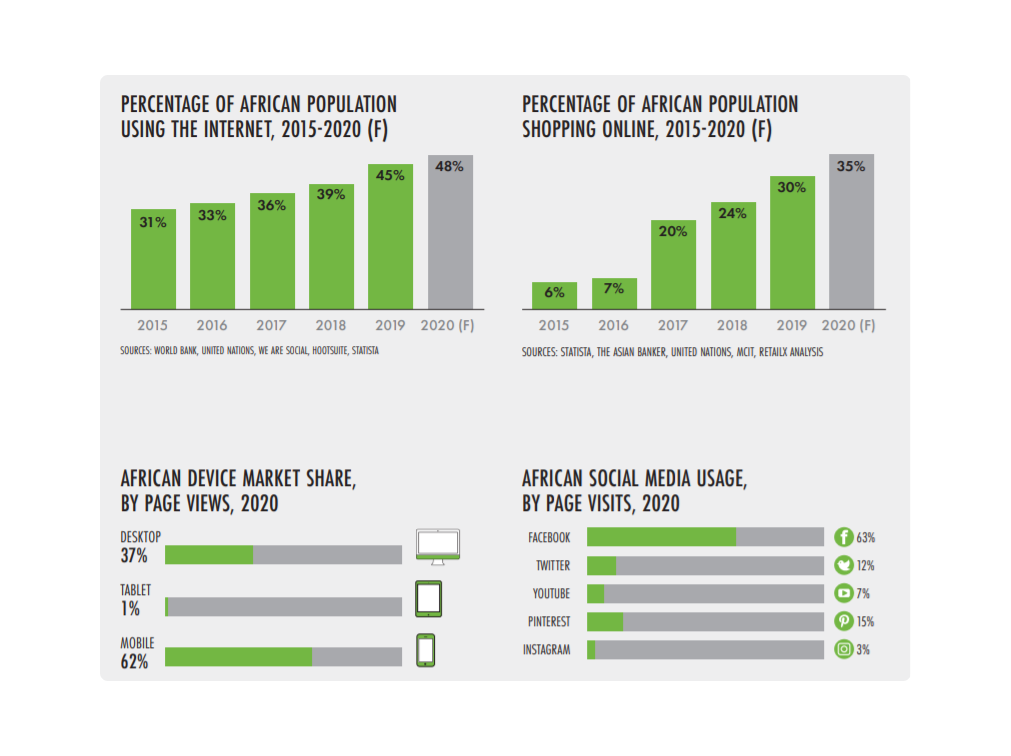 The forecasts say that 48% of the African continent habitants were supposed to use the Internet and 35% shop online.

As much as 62% of African people use mobile to search the Internet, and only 27% choose desktop. There is also no surprise that Facebook is the most popular social media platform.

When it comes to eCommerce,  the turnover in the B2C market was supposed to reach $30 billion in 2020.

Let’s start with the country from the north of this continent – Egypt.

In 2020 the ware forecasted that estimated Internet usage hit 63%. About 40% of Egyptians may decide to shop online, which means a quite great increase, comparing to the previous year.

The turnover in the B2C eCommerce market was expected to reach $7.04 billion. Almost 50% of web traffic was generated by retailers.

About 35% was generated by marketplaces, and brands generated 15%. In 2018 72% of eCommerce users paid by cash for their purchases, and 22% paid by cards.

Now let’s talk about eCommerce in Kenya. Almost 40% of Kenyans use the Internet via desktop, and a little over 60% use mobile for this purpose.

What is quite interesting in 2019, 83% of e-shoppers used credit/debit cards, and as much as 57% paid for their purchases via mobile.

South Africa is the fastest growing country in Africa. As much as 71% of citizens use mobiles to search the Internet, only 28% use for this purpose desktops.

There are more and more eCommerce fans – in 2020, it was forecasted that 57% of the population would be doing shopping online.

When it comes to payments, credit cards were a favorite way of payment for online shopping. The second-place belongs to debit cards.

The turnover in the B2C eCommerce market was forecasted to hit $3.50 billion which means an increase compared to 2019.

What is quite unusual, Australia and New Zealand are a part of the Asian chapter in this report. We will cover it separately.

Asian countries are considered to be eCommerce giants. The mobile economy is not something new here, and the market is full of mature eCommerce businesses. Almost 60% of Asia’s population uses the Internet and about 54% was supposed to do online shopping last year. Asia is also the continent where mobile market share is greater (50%) than desktops (47%). The turnover on this B2C eCommerce market in 2019 was $1.1 tn, and it was estimated that in 2020 it would be $1.4 tn.

China is a world market powerhouse. In this country live the most people in the world, and therefore it has enormous purchasing power.

In the case of online payment, the Chinese have their own apps and ways. The favorite (96% of online users use it) one is We Chat Pay, an online and mobile payment app. The second place belongs to Ali Pay, which is a mobile payment platform. It is used by 94% of online shoppers. Only 24% of them use e-wallets or services provided by banks.

India is the second-largest country in the case of population. About 48% of citizens were online, and in 2020, it was expected to be 50%.

Indians like to shop online. It was forecasted that in 2020 about 40% of them would be doing it.

They prefer the pay by Paytm. And Indian app dedicated to mobile and quick payments. Then comes Google Pay and PhonePe, and Indian e-wallet.

The turnover in the B2C eCommerce market is growing rapidly. In 2019, it was $33.20 bn, and in 2020 it was expected to hit $48.99 bn. These numbers show that eCommerce has great potential here, and it is very popular right now.

eCommerce in Australia and New Zealand

In Australia, Internet use remains at a similar level.  87% – 88% of Australians seeking information online, and 70% shopping online.

They like to pay online and via credit and debit cards. Also, direct debit has its fan. Turnover in the B2C market was expected to reach $27.24 bn in 2020.

New Zealand citizens love to be online, about 94% of them use the Internet, and 64% do shopping online.

Unlike Asian countries, New Zealanders prefer desktops to mobiles. More than half of them use desktops.

About 40% of New Zealanders pay via credit card for their online shopping and 30% use PayPal for this purpose.

eCommerce in the Middle East

The eCommerce in the Middle East market has a big potential due to the high popularity and availability of the Internet.

About 86% of the population uses the Internet, but only 48% of them do shopping this way. The B2C turnover in this market was expected to reach $55 tn.

Nearly 90% of Israelis are online, and 48% do shopping this way. They prefer to pay via card for online purchases – Visa covers 37% of this market, Mastercard 21%, and Isracard 29%.

Here 100% of the population has Internet access, but nearly 70% of them do shopping online.

When it comes to cross-border shopping, the USA covers 30% of this market. Both the UK and India cover 18%.

Europe is primarily comprised of the countries in the European Union, even though not the entire continent is a member. An example of such countries is Russia or the UK that has left the European Union. About 80% of Europeans use the Internet, and 60% do shopping online.

A B2C eCommerce turnover was expected to reach $660 tn in 2020. Now let’s cover European countries. We will start with the biggest eCommerce in Europe, France.

About 90% of French use the Internet, and nearly 80% do shopping online. French people prefer to use desktop over mobile. They also choose to pay online or via bank card for their purchases.

About 94% of German use the Internet. 85% of them do shopping online and most of them pay for them via e-wallets or invoice. Nearly 30% of Germans pay for their online purchases via bank transfer. Germans appreciate the ability to choose when and where the delivery will occur. Also fast delivery is big pro for them.

The biggest traffic is generated by marketplaces, more than a half. Then comes retailers – nearly 36% of web traffic. Brand web traffic covers only about 7%.

There is about 85% of the Russian population online, but only 46% of them were expected to do shopping via the Internet in 2020. The most preferred delivery method here is Russian Post.

Despite the fact that Brexit took place in 2020, its real effects will actually be felt in 2021. Even so, the transition period last year has brought about some changes.

More than 90% of British use the Internet, which is similar to eCommerce in France.

Most of the eCommerce users in the UK choose to pay via debit/credit card or PayPal (and similar solutions).

Almost 70% of Americans have access to the Internet, and about 85% of them shop online. The turnover on the North American B2C market was expected to be $758 tn. The biggest player here is the USA so let’s cover this market.

eCommerce in The United States

Nearly 90% of the United States citizens are online, while 77% do shopping this way. They prefer to pay online like via PayPal or by credit and debit cards.

The turnover on the B2C eCommerce market was forecasted to hit $709 bn last year. Marketplaces and retailers generate a similar level of traffic (48% and 45%).

This market is still developing. The percentage of access to the Internet is growing, as is online shopping. In 2020, 74% of the population was expected to be online, and nearly 50% do shopping this way.

About 80% of Argentines are online, and 55% do shopping online. They prefer to pay via credit and debit cards. Also, online payments are popular here.

Brazil is the biggest country in South America. About ¾ of its population has Internet access, and nearly 50% do shopping this way. There are three main payment methods in Brazil: credit cards, PayPal, and Boleto (payment slips, using both online and offline).

The turnover in the B2C market was expected to reach $19.20 bn. Marketplaces generate the biggest web traffic – over half of it.

Nearly 70% of Colombians have Internet access about less than a half of Colombia’s population do shopping online.

Colombians prefer to pay cash on delivery or via PayU. The turnover on this market was predicted to hit $9 bn in 2020.