Hungary is a country in Central Europe. It has no access to the sea. It borders seven countries: Austria, Slovakia, Ukraine, Romania, Serbia, Croatia, and Slovenia. Since 2004 it belongs to the European Union. This country’s GDP was US$160.97 billion in 2019, which stood for 0.13 of the world economy.

In this article, we will cover the situation of the Hungarian ecommerce market, making it easier to understand its specification. Let’s start with an ecommerce overview.

By the end of this year value of the Hungarian ecommerce market is projected to reach US$1,464m. In five years, it could hit US$2,262m. There are almost 5 million ecommerce users in Hungary, which means that user penetration stands at the level of 50.3% and projects to increase in five years to nearly 60%.

The most significant ecommerce sector is Fashion, which brings 40% of the Hungarian ecommerce revenue. The second place belongs to Electronics & Media with 25%, following by Food & Personal Care with 14%. The last two sectors are Toys, Hobby & DIY, with 12% of revenue and Furniture & Appliances, which generates 8% of it.

When it comes to favorites ecommerce, 4 out of 5 are based in Hungarian domains. The leader here is the eMag – Hungarian marketplace that generated US$106m of net sales. Then come Alza with US$74m and Tesco with US$63m.

Hungarian society is developing rapidly, and so is consumer awareness. Therefore, more and more Hungarians pay attention to what kind of food they buy and give up highly processed, ready-made meals. Environmental awareness is also growing. The number of one-person households is increasing, and so as share of seniors in the total population of Hungary. It determines the size or capacity of the products offered on the markets.

Hungary will not fall behind when it comes to ecommerce. Since the beginning of this year, 9 out of 10 consumers aged 18 to 79 have shopped online. When shopping online, Hungarians do not limit themselves only to domestic products – foreign stores attract their attention, and many of them prefer foreign brands to domestic ones.

The most popular country to buy from is undoubtedly Germany. Hungarians purchase here items worth US$28.5 billion. There is a huge difference between first place and the second in this ranking. Romania comes second with only US$5.75 billion value of the purchase. Then comes Italy – US$5.42 billion, Austria with US$5.3 billion, and last but not least the USA – US$4.88 billion.

The efficiency of electronic payments in Hungary is on an increasingly higher level. The number of transactions with payment cards, in particular contactless cards, is growing. EcoPayz, a prepaid payment solution, is present on the Hungarian market for quite a while and consumers use it to make international transactions. 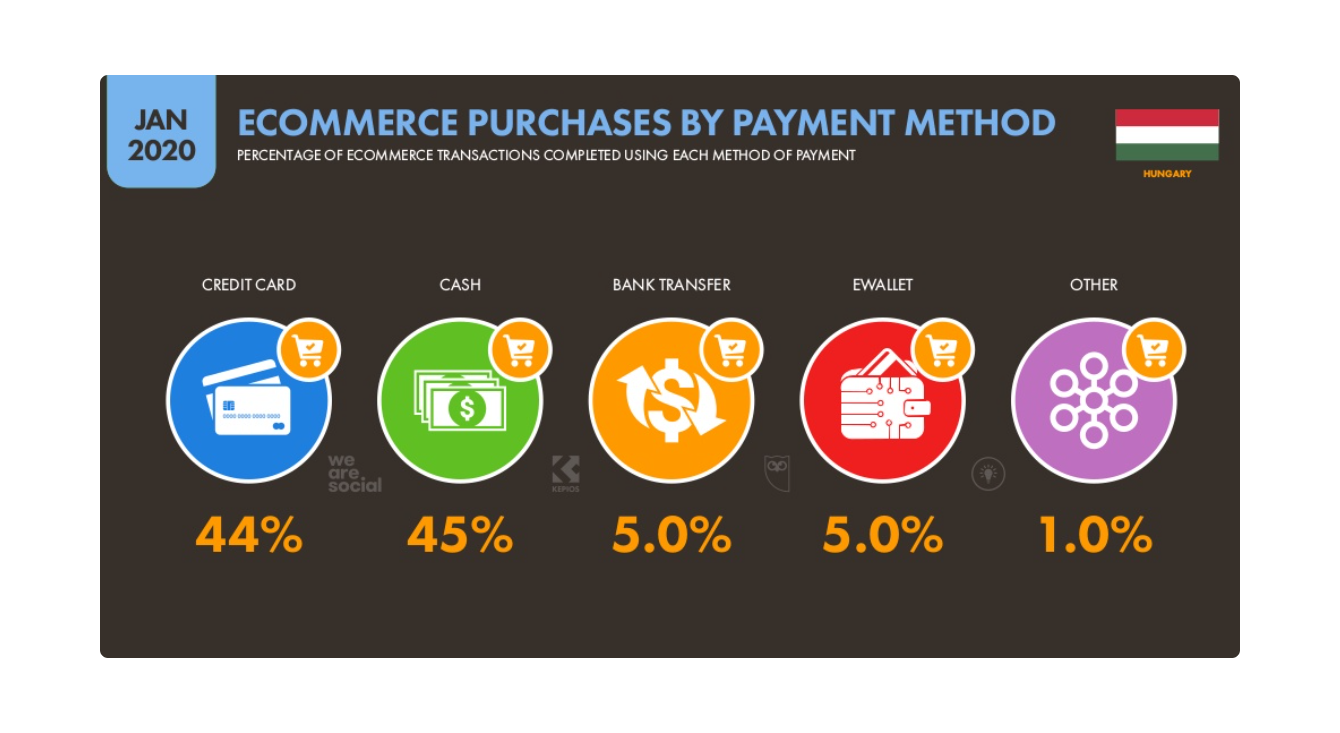 The most popular payment method is still cash. Credit cards have a little fewer fans. There is only one percent difference. Then ex aequo bank transfers and e-wallet – both cover five percent.

When it comes to mobile payments, Mobiano is one of the most popular providers. Also, PayPal has its fans in Hungary. With the growing popularity of Amazon, over time, Amazon Pay is used very often.

There are 7.64 million Internet users in Hungary. This means that almost 80% of its population has an Internet connection. What is also crucial – 94% of social media users use it via mobile. So be prepared for mobile-friendly content. 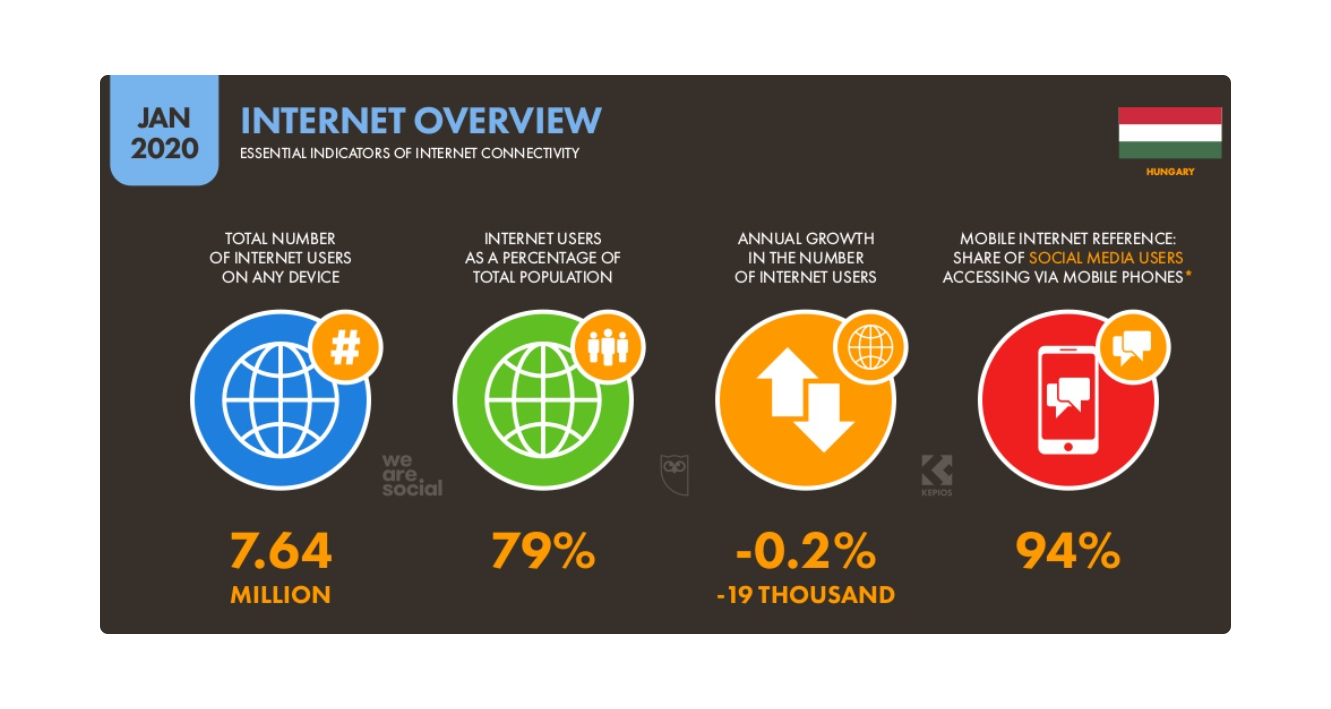 There are a lot of people on social media – around 6 million, which means an increase of 5.9% compared with the previous year. It seems like social media are getting popular, so feel free to use it!

Thanks to using Facebook Ads you can reach 5.60 million people. It is quite a number. In the case of Instagram – it has less power, 2.10 million. Twitter has the lowest score – only 4.335 million can be reached via this platform.

Logistics and its corridors are evenly distributed throughout the country. For logical reasons, most logistics centers are located near the country’s borders and around the capital city – Budapest. Sea transport is based on the use of the Danube. As you can see below, Hungary has several ports. There are also three airports.

There are five leading providers on the Hungarian delivery market – DPD, Sprinter, MPL, Express One, and GLS. The most significant is the DPD. It covers the largest numbers of shipments. It is present on this market since 2003. So it means for almost two decades it provides the highest quality of delivery service..

Hungary is an unappreciated market when it comes to ecommerce. It has a big potential, so if you want to enter this Central European market, we keep our fingers crossed. After reading this article, you know how to win Hungarians’ hearts. And you know that they are open to not-native products. Why not try it?

If you are interested in other European countries’ ecommerce market, you can find articles about Spain, Austria, or Denmark for Scandinavia fans. And there is more. Feel free to dive in.